In 2023, the GAMES project continues to move forward after having produced four deliverables throughout 2022.

Currently, the GAMES project is developing the NOCs’ National Action Plans and Pool of Actions to promote gender equality in sport governance and leadership.
The GAMES Pool of Actions has the scope to be a manual of concrete actions to promote gender equality in leadership positions among European NOCs. Hence, it provides concrete actions to guide NOCs, European and National Federations (NFs), as well as sports organisations at the grassroots level, to strengthen gender equality in leadership positions whilst taking into account the organisation’s current stage of readiness and the political and socio-cultural barriers existing.

The GAMES Pool of Actions is expected to be structured into three main pillars; accordingly, a set of key topics per each pillar have been identified:

Hence, the GAMES Pool of Actions aims to provide a roadmap of concrete actions to tackle structural procedures and cultural barriers which reinforce the gender gap whilst promoting pathways for gender equality. This with the ultimate scope to strengthen gender equality in leadership and decision-making positions within NOCs, NFs and sports organisations at all levels (i.e grassroots sport clubs).

The GAMES project is a 24-month project co-funded by the European Commission through the Erasmus+ Sport Programme 2021 and coordinated by the EOC EU Office. It promotes integrity and good governance in sports by advocating for structural and cultural changes regarding gender equality in leadership and decision-making positions among NOCs and their member federations. The EOC EU Office is implementing GAMES together with 8 NOCs (Belgium, Czech Republic, Germany, Greece, Ireland, Latvia, North Macedonia and Turkey) and renowned experts in the field of gender equality and good governance, including Professor Emerita Kari Fasting from Equal Rights in Sports and I TRUST Sport. Furthermore, the GAMES project is supported by the International Olympic Committee. 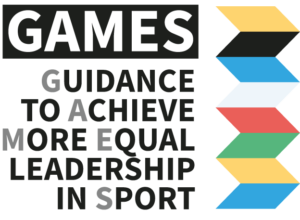