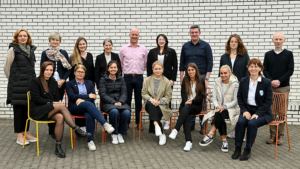 The Transnational Project Meeting of the GAMES project (Guidance to Achieve More Equal Leadership in Sport) was hosted by the Olympic Federation of Ireland in Dublin on 27-28 September 2022.

The meeting gathered representatives from the National Olympic Committees (NOCs) of (Belgium, Czech Republic, Germany, Greece, Ireland, Latvia, North Macedonia and Turkey), experts on gender equality and sports governance such as Professor Kari Fasting (Equal Rights in Sports) and Rowland Jack (I Trust Sport), as well as the IOC. By pairing scientific knowledge with practical experience, the GAMES project aims to support NOCs in creating concrete strategies to promote gender equality in leadership and decision-making positions.


Day 1
Heidi Pekkola (Deputy Director, EOC EU Office) and Peter Sherrard (CEO, Olympic Federation of Ireland) opened the meeting by thanking all participants for their attendance. These highlighted the scope of the meeting being to discuss the finding that emerged from the baseline study, as well as the designing of the Global Pool of Actions. After which, a brief overview of the status of the project was provided; accordingly, the consortium was thanked for the timely and valuable contributions in ensuring that the activities and deliverables were duly and timely carried out and submitted, so far.

Rowland Jack (I Trust Sport) presented the findings of the GAMES baseline study. The consortium engaged in an inspiring discussion and peer-to-peer exchange about the results of the study and the current and future strategies required to create the desired change to promote gender equality. A wide range of topics were tackled, among others gender equality strategies, male allyship, as well as communication, gender budgeting and mainstreaming. Hence, fruitful additions were made towards the advancement of the project scope.


Taking into account the findings of the GAMES baseline study, the Global Pool of Actions was discussed afterwards. Accordingly, the consortium discussed the significance of the work and the general structure of this “manual for concrete actions” to reach gender equality. Ultimately, the consortium came to several conclusions to enhance its comprehensiveness and accuracy.


Day 2
On the second day, guest speakers - representing both NOCs and International Federations – have been invited to share their experiences in promoting gender equality in leadership and decision-making positions. Accordingly, Sarah Keane (President of the Olympic Federation of Ireland) has shared her personal experience on the lessons learnt and successful strategies to advance the topic of gender equality on the political agenda and to truly get political support for actions and changes. Dagmara Gerasimuk (Development Director at the International Biathlon Union - IBU) thereafter has presented the organisational/structural changes that IBU has carried out to promote gender equality as part of wider governance reforms. Hence, the consortium benefitted from several transferable initiatives and actions described to structurally and political boost gender equality in leadership and decision-making positions.


After this, an open discussion has been held among the consortium regarding the content foreseen in each of the “topic” foreseen in the Global Pool of Actions. The consortium exchanged useful inputs on the content whilst highlighting the importance of the Global Pool of Actions of being transferable; and yet, taking into consideration country’s and organisation’s context to develop effective and sustainable strategies.


The meeting came to a conclusion with Heidi Pekkola (Deputy Director EOC EU Office) and Peter Sherrard (CEO Olympic Federation of Ireland) who mentioned that the upcoming months are foreseen to be crucial for the project activities. Hence, the entire consortium was thanked for their time and contribution to boosting gender equality in sports leadership.


The next Transnational Project Meeting is foreseen to be hosted by the NOC of Tukey in Istanbul on the 16 and 17 of January 2023.

GAMES project is a 24 months project co-funded by the European Commission throught the Erasmus+ Sport Programme 2021. It promotes integrity and good governance in sport by advocating for structural and cultural changes regarding gender equality in leadership and decision-making positions among NOCs and their member federations.

EPAS workshop on Gender Equality in the media is aligned with the action proposed in #GAMESProject Pool of Actions to provide ad-hoc training for media roles on gender-equal portrayal practices & biases in women’s sports media coverage.
@EuSport @EUErasmusPlus @EOCmedia @iocmedia

The Council of Europe ⁦@sport_coe⁩ Forum on Sport and Human Rights is in progress today.
Focus on:
-Freedom of expression of athletes,
-Freedom of the press,
-Combating hate speech in sport.
- ⁦@MitrP⁩ speaking on: Gender Equality & media https://www.coe.int/en/web/sport/-/forum-on-sport-and-human-rights-focus-on-freedom-of-expression