The Turkish Olympic Committee (TOC) is pleased to be a partner in the new Erasmus+ Project named “Guidance to Achieve More Equal leadership in Sport” (GAMES).

The TOC was established in 1908 as an autonomous, non-profit and non- governmental organisation working for the benefit of society. Its mission – as outlined in the Olympic Charter – is to develop, promote and protect the Olympic Movement in Turkey. While promoting and instilling the basic principles and values of Olympism as well as ethical and moral standards in sport to all and contributing to mutual understanding and friendship among nations for peaceful coexistence, TOC uses its mandate to positively enhance the Turkish sport, its athletes as well as harmonic development of people at large. Accordingly, TOC identifies integrity, diversity, equity, inclusion and good governance as core values serving as the basis of all its main areas of activities that comprise supporting athletes, developing children and youth sports, assisting Turkish organised sports, enhancing international representation, and promoting Olympic values. In its activities, TOC priorities girls and women and defends and implements gender equality in sports and sports management.

Promoting gender equality and empowering women in all spheres of sport has been a priority for and a part of TOC’s organisational culture. TOC is strongly committed to achieve gender equality, not only within the institution itself but also in the sports environment of the country. While paying regard to advancing gender equality and assisting women in getting into leadership positions in its own administration, TOC similarly takes it into account in its service providing policies and practices with the other stakeholders in Turkish sport, in particular, the national sports federations. Paying regard to gender equality and addressing gender equality issues to create meaningful changes are among the guiding principles of all TOC activities regarding its governance, human resources, workplace as well as funding provided for the athletes, national teams and coaches and athlete portrayal. Having adopted the IOC recommendations of compliance with basic principles of good governance and fostering gender equality, TOC administration regards gender equality as part of good governance. As a result, today all the ‘Organs’, ‘Boards’, ‘Commissions’ and ‘Committees’ of the TOC harbour significant women participation. At TOC Athletes’ Commission, women represent 50 % of the members. TOC policies towards increasing the number of our female athletes competing at the Olympic Games have paid off: the ratio of female athletes in the Turkish Teams participating at the last 3 Olympic Games increased from 28 to 58 %.

Within the GAMES project, the TOC will be responsible for developing its tailor-made Action Plans to improve gender equality in the leadership within their NOCs according to the results that emerged from the baseline analysis and including the most relevant practices/actions identified within the Global Pool of Actions. Accordingly, the TOC will be responsible for organising a National Launching Event with the purpose of presenting its tailor-made Action Plan, as well as further reviewing its feasibility and receptivity among relevant sports stakeholders at the national and regional levels (i.e national federations, sports clubs…). Hence, during the design of the Action Plans and National Launching Event, the TOC is expected to take part in a series of peer-learning activities among partners NOCs that aim to promote the sharing of knowledge, best practices and lessons learnt meanwhile addressing future joint strategies on gender equality between NOCs and relevant national/regional stakeholders (i.e national federations, sports clubs…).

Under the guidance of the project coordinator - the EOC EU Office – the TOC is going to implement the GAMES project together with 7 other NOCs (Belgium, Czech Republic, Germany, Greece, Ireland, Latvia and North Macedonia), and renowned experts in the field of gender equality and good governance, including Professor Emerita Kari Fasting from Equal Rights in Sport and I TRUST Sport. Furthermore, the International Olympic Committee (IOC) will also act as a key player in terms of promoting and disseminating the project deliverables across all NOCs worldwide. 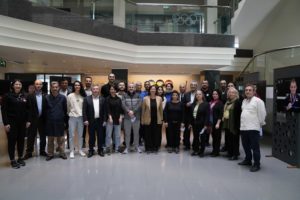