The Latvian Olympic Committee (NOC LAT) is pleased to be a partner in the new Erasmus+ Project named “Guidance to Achieve More Equal Leadership in Sport” (GAMES).

The NOC LAT is a non-profit organisation affiliated with the International Olympic Committee to represent Latvia in the realm of sports. The mission of NOC LAT is to strengthen the role of sports in the population by promoting the ideals of the Olympic movement and the high achievements of Latvian athletes, as well as motivating Latvian residents to regularly practice physical activity in order to promote their health and wellbeing. Accordingly, the NOC LAT has undertaken several activities at the national level to promote peace and good governance in sport, tackle the use of doping and climate change in sport, as well as encourage the participation of girls and women in sports.

In terms of gender equality, aligned with the IOC guidelines in the Olympic Agenda 2020+5, the NOC LAT is in the process of developing regulatory documents to add to the guidelines governing the participation of women in organisation work. Besides, the NOC LAT is a partner in various projects promoting women’s empowerment in sports. And yet, the NOC LAT does not have any established gender equality strategy or policy, currently.

Within the GAMES project, the NOC LAT will be responsible for developing its tailor-made Action Plans to improve gender equality in the leadership within their NOCs according to the results that emerged from the baseline analysis and including the most relevant practices/actions identified within the Global Pool of Actions. Accordingly, the NOC LAT will be responsible for organising a National Launching Event with the purpose of presenting its tailor-made Action Plan, as well as further reviewing its feasibility and receptivity among relevant sports stakeholders at the national and regional levels (i.e national federations, sports clubs…). Hence, during the design of the Action Plans and National Launching Event, the NOC LAT is expected to take part in a series of peer-learning activities among partners NOCs that aim to promote the sharing of knowledge, best practices and lessons learnt meanwhile addressing future joint strategies on gender equality between NOCs and relevant national/regional stakeholders (i.e national federations, sports clubs…).

Under the guidance of the project coordinator - the EOC EU Office – the NOC LAT is going to implement the GAMES project together with 7 other NOCs (Belgium, Czech Republic, Germany, Greece, Ireland, North Macedonia and Turkey), and renowned experts in the field of gender equality and good governance, including Professor Emerita Kari Fasting from Equal Rights in Sport and I TRUST Sport. Furthermore, the International Olympic Committee (IOC) will also act as a key player in terms of promoting and disseminating the project deliverables across all NOCs worldwide. 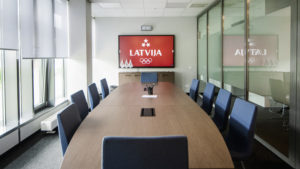