The Hellenic Olympic Committee (HOC) www.hoc.gr is pleased to be a partner in the new Erasmus+ Project named “Guidance to Achieve More Equal leadership in Sport” (GAMES).

The HOC was founded in Athens, on November 24th 1894. Its mission is to oversee and act to ensure the development, promotion and safeguarding of the Olympic Movement, the spirit of fair play and out-of-school physical activity, in accordance with the principles of the Olympic ideals and the traditions of the Hellenic sport. Its role is to:
supervise Olympic Sports and cooperate with the State and the public and private bodies for the promotion of healthy sports policies
encourage participation in sports and respect for the spirit of sportsmanship among the young.
organise, in cooperation with the National Federations, the Olympic preparation of athletes.
proceed to the final selection of athletes who will represent Greece at the Olympics, Mediterranean Games and other (trans)continental competitions that are held under the patronage of the International Olympic Committee (IOC)
ensure that the rules of the IOC Olympic Charter are correctly applied.

The HOC, through the Hellenic Olympic Academy, demonstrates a rich educational work that aims to spread to the youth of Greece the Olympic Education and the value of fair play as well as to contribute to the fight against the phenomena of any form of discrimination and violence in sports.

In terms of gender equality, under the auspices of the HOC and with the support of the IOC, the Hellenic Olympians Association has been running, over the last years, the project “Make Place For One More Woman". The project aims to contribute to the reduction of inequalities faced by women in sports, increase gender equality in responsibility and decision-making (e.g., coaches, representatives) positions and raise awareness of the issue. Through the project “Make Place For One More Woman" scholarships have been awarded to women in sports management, coaching, arbitration or medical care for athletes. Since 2019, rewards have been given to honour inspiring women involved in sport at all levels and in all positions.

Furthermore, the HOC is in line with the policies, procedures and recommendations of the IOC and participates in its initiatives on gender and sport. The HOC also urges its members to adopt the IOC General Principles and Recommendations on Gender Equality, such as setting a minimum target of 30 per cent for the representation of women in administrative bodies and the adoption of accompanying measures. The HOC has set up the Gender Equality Commission, which has recently organised, together with the Hellenic Olympic Committee’s Athletes’ Commission, a series of gender equality webinars, open to athletes, national sports federations and other organizations or individuals who are interested in advancing gender equality in sport. Additionally, the HOC has been trying to build strong partnerships with private & public actors on gender equality. And yet, the HOC acknowledges that a major gap exists between policy design and implementation, as well as the need for structural change in the field of gender equality in sport

Within the GAMES project, the HOC will be responsible for developing its tailor-made Action Plan to improve gender equality in the leadership within its organization according to the results that emerged from the baseline analysis and including the most relevant practices/actions identified within the Global Pool of Actions. Accordingly, the HOC will be responsible for organising a National Launching Event to present its tailor-made Action Plan, as well as further reviewing its feasibility and receptivity among relevant sports stakeholders at the national and regional levels (i.e. national federations, sports clubs…) Hence, during the design of the Action Plan and National Launching Event, the HOC is expected to take part in a series of peer-learning activities among partners-NOCs that aim to promote the sharing of knowledge, best practices and lessons learnt meanwhile addressing future joint strategies on gender equality between NOCs and relevant national/regional stakeholders (i.e. national federations, sports clubs…)

GAMES is a 24-month project, which focuses to improve gender equality in the key leadership and decision-making positions of the NOCs by promoting structural changes in their governance, enhancing the understanding of the existing cultural barriers and encouraging the NOCs to work with their member federations to create a sustainable change.

Under the guidance of the project coordinator - the EOC EU Office - the HOC is going to implement the GAMES project together with 7 other NOCs (Belgium, Czech Republic, Germany, Ireland, Latvia, North Macedonia and Turkey), and renowned experts in the field of gender equality and good governance, including Professor Emerita Kari Fasting from Equal Rights in Sport and I TRUST Sport. Furthermore, the International Olympic Committee (IOC) will also act as a key player in terms of promoting and disseminating the project deliverables across all NOCs worldwide. 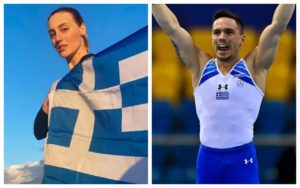 Olympic Champions Anna Korakaki and Lefteris Petrounias have been the Flag Bearers for Greece at the Opening Ceremony of the Tokyo 2020 Olympic Games. This decision to have male and female bearers is a first in the Greek team history, reflecting the will for gender equality.