The Czech Olympic Committee (CZ NOC) is pleased to be a partner in the new Erasmus+ Project named “Guidance to Achieve More Equal leadership in Sport” (GAMES).

CZ NOC was established on 18 May 1899 with the aim to develop, promote and protect the Olympic movement and its ideals, and ensure the participation of the National Team’s athletes in Olympic events. Its first president, Jiří Stanislav Guth-Jarkovský, was one of the twelve founding members of the International Olympic Committee.

CZ NOC operates nationally and internationally in accordance with the Olympic Charter and with the applicable laws of the Czech Republic. In its structures, it unites sports federations, associations and other sports and physical education organisations of the Czech Republic; however, it is not a confederation. In its projects, events and activities, it promotes sport as a lifestyle and strives to make it accessible for all. It tries to contribute to building a stronger civil society and reinforcing social cohesion, including through the promotion of Olympic values, among which gender equality.

CZ NOC is active in the field of gender equality in sport through, in particular, its Equal Opportunities Commission. Established in 1996 (under the name of Women in Sport), and chaired since 2020 by former professional basketball player Ilona Burgrová, the Commission covers topics ranging from gender equality in leadership to the prevention of harassment, violence and abuse in sport. To address these topics, the Commission organises a number of activities (e.g. Female trainer-coach awards, regular seminars, mentoring programme) and is actively engaged in others (e.g. international projects such as SUCCESS). Its long-term aims and corresponding activities have been recently integrated in the Sustainability Strategy 2030 of the Czech Olympic Committee, which has as its main objective to set the organisation on the path of sustainability in all of its main dimensions – economic/governance, social and environmental.

The Commission is very active and plays a significant role in the Czech sports movement; however, CZ NOC does not have any established gender equality strategy or policy. This fact constituted a major motivation for the organisation to join the GAMES project. Indeed, in the framework of the GAMES project, CZ NOC will be responsible for developing a tailor-made Action Plan to improve gender equality in its leadership; a goal, which is also included in the aforementioned Sustainability Strategy 2030.

Accordingly, CZ NOC will be responsible for organising a National Launching Event with the purpose of presenting its tailor-made Action Plan, as well as further reviewing its feasibility and receptivity among relevant sports stakeholders at the national and regional levels (i.e national federations, sports clubs…). Hence, during the design of the Action Plans and National Launching Event, CZ NOC is expected to take part in a series of peer-learning activities among partners NOCs that aim to promote the sharing of knowledge, best practices and lessons learnt meanwhile addressing future joint strategies on gender equality between NOCs and relevant national/regional stakeholders (i.e national federations, sports clubs…). 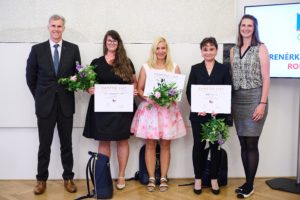